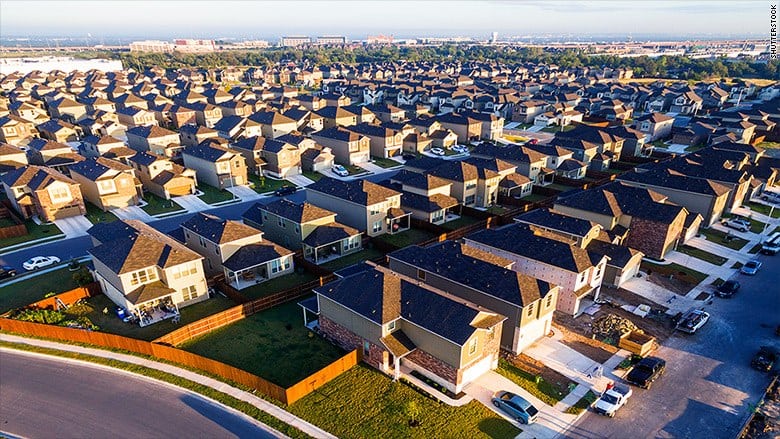 Foreigners are getting serious about “Buying American” real estate.

The National Association of Realtors released a report Tuesday that said foreign buyers and recent immigrants spent an estimated $153 billion on American properties in the year ending March 2017. That was a 49% increase over the previous year and the highest level since record-keeping began in 2009.

The purchases accounted for 10% of the total value of existing home sales in the U.S. The report did not include new homes.

The breakdown of sales between foreigners and recent immigrants was about 50:50.

America's neighbors to the north were one big factor behind the surge.

Canadian real estate investors nearly doubled their purchases of American homes over the period because of the relative affordability of properties in the States. Many Canadians have been squeezed out of property markets in cities like Toronto and Vancouver that have experienced rapid price gains.

Canadians were the second biggest foreign purchasers of homes after the Chinese. Buyers from China shelled out nearly $32 billion over the period, while Canadians spent $19 billion.

Foreign buyers had to brush off U.S. political turmoil in order to make their purchases.

“The political and economic uncertainty both here and abroad did not deter foreigners from exponentially ramping up their purchases of U.S. property over the past year,” said Lawrence Yun, chief economist at the National Association of Realtors.

“While the strengthening of the U.S. dollar in relation to other currencies and steadfast home-price growth made buying a home more expensive in many areas, foreigners increasingly acted on their beliefs that the U.S. is a safe and secure place to live, work and invest,” he said.

Nearly half of all foreign sales were in three states: Florida, California and Texas.

Canadians gravitated to Florida. Chinese buyers focused on California. And Texas was the preferred state for Mexican buyers.

New Jersey and Arizona were the fourth and fifth most popular states.

The report estimated foreign buyers typically paid just over $302,000 per property, up 9% from the previous year.

About 10% of foreign buyers paid over $1 million.