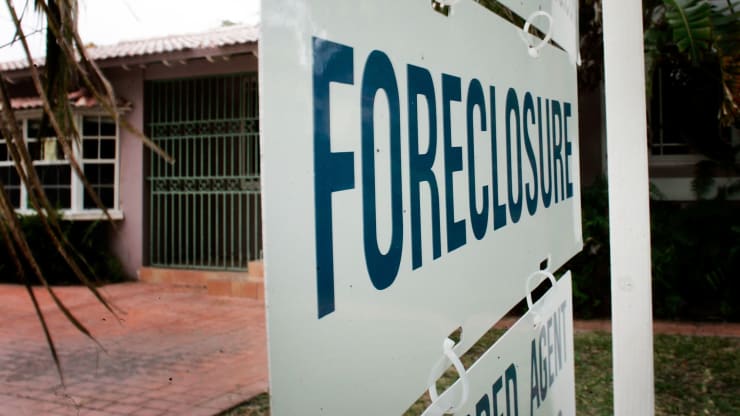 @IN/DIANAOLICK@DIANAOLICKCNBC@DIANAOLICK
As the growing economic impacts of the coronavirus roll through the U.S., some of the nation’s largest mortgage lenders are already getting calls from borrowers, concerned they won’t be able to make their monthly payments. Both government and independent regulators for the mortgage industry are now working on plans to deter another foreclosure crisis.

While it takes 90 days for a loan to become delinquent officially, the expectation is that there will certainly be a spike.

Currently mortgage delinquencies are near record lows, as lending tightened significantly after the subprime mortgage crisis. Until now, home values and employment were both strong, and home equity is at a record high.

Fannie Mae and Freddie Mac already have loan forbearance programs in place, often implemented during natural disasters, but the current situation is neither local nor momentary.

“We’re on the front end of this. We don’t know,” said Mark Calabria, director of the Federal Housing Finance Agency (FHFA) which currently oversees Fannie Mae and Freddie Mac under government conservatorship. “If this goes more past the summer, certainly it’s going to call for a different set of responses.”

For now, Calabria said borrowers do not need to have been sickened by the virus to qualify, only to show financial hardship.

“You could be working somewhere, you’ve lost your job, that is a hardship that we will count. You can just be adversely impacted economically,” said Calabria.

In Italy, mortgage payments are being suspended temporarily, but so far the Trump administration has made no mention of that in the U.S. Some members of congress have called for a suspension on both foreclosures and evictions from rental homes.

“Ultimately whether there is a broad-based suspension of mortgage payments, the White House or Congress would have to lead on that. I think that they’re moving on these issues,” he added.

Calabria said so far they have had no applications for forbearance, but large lenders are hearing from borrowers and waiting for more guidance from FHFA.

“Wells Fargo is working on a daily basis to ensure we are putting measures in place to support the needs of our customers impacted by COVID-19 in the most effective ways,” said Tom Goyda, a spokesperson for Wells Fargo.

“We are currently providing assistance including fee waivers, payment deferrals, and other expanded assistance for credit card, auto, mortgage, small business and personal lending customers who contact us, and we will continue to communicate with customers as the situation evolves,” he said.

There is also concern over delinquencies hitting the FHA, the government’s mortgage insurer. FHA backs low down payment loans for borrowers who may have lower credit scores. These borrowers would likely be more sensitive to any disruption of income. The vast majority of FHA lenders are now nonbanks and don’t have the same liquidity. If they offer forbearance to borrowers, their investors still need to be paid and it’s questionable whether nonbank lenders can handle that.

In an interview about non-bank lending on CNBC last month, Ted Tozer, former president and CEO of Ginnie Mae, which guarantees FHA and VA loans, explained the issue.

“The big challenge they have is they do not have access to the liquidity the banks have–Deposits, CDs. They have to rely on short-term bank lines of credit which could be pulled back in the time of a recession when they need that liquidity to stay afloat,” said Tozer.

The Treasury already announced a mortgage stimulus, pumping $200 billion into mortgage-backed bonds, in order to stabilize mortgage rates, but so far there is no new plan for current borrowers. Calabria said he expects to announce more later this week.